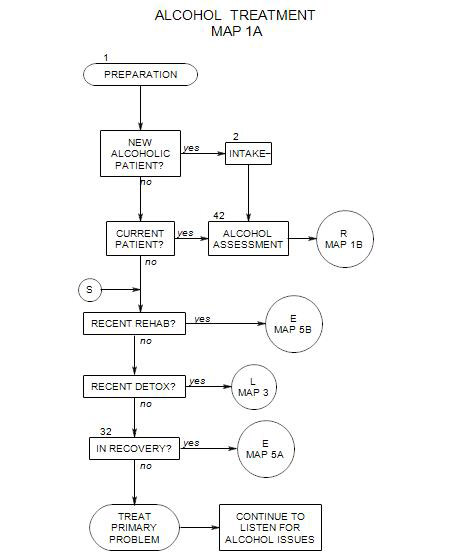 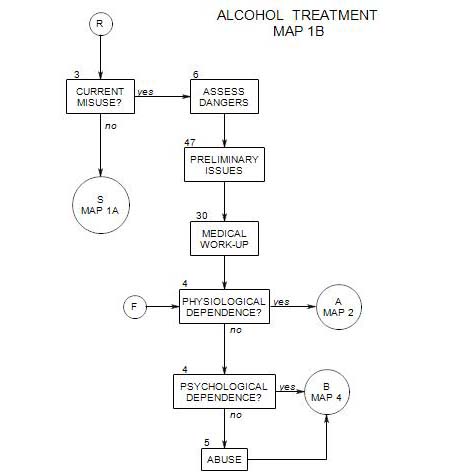 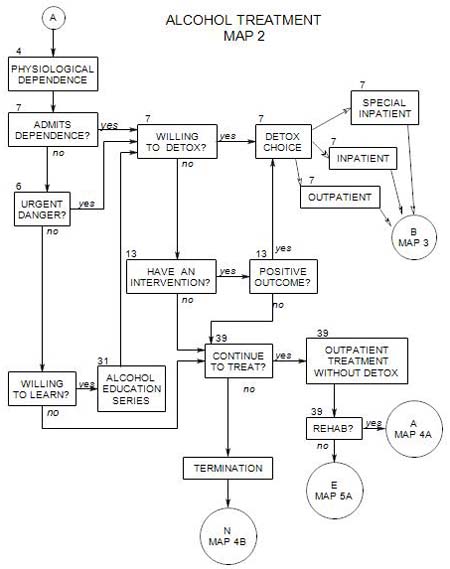 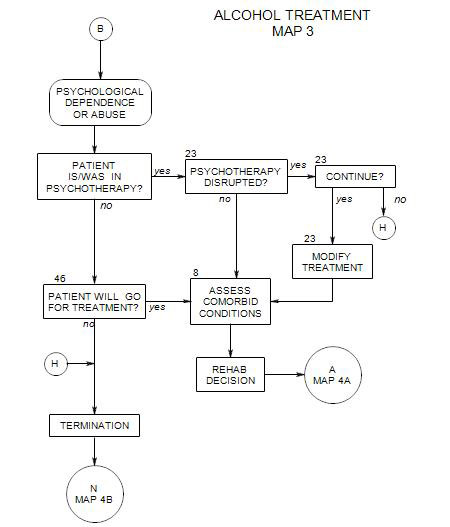 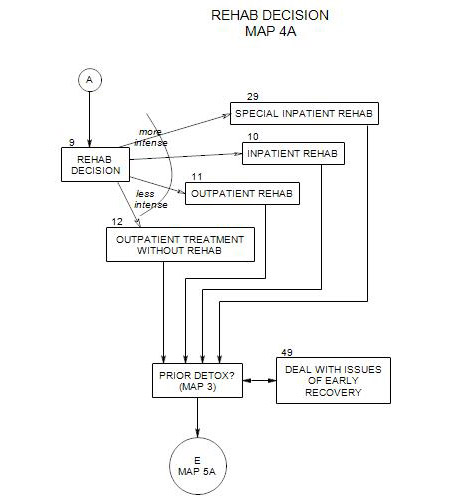 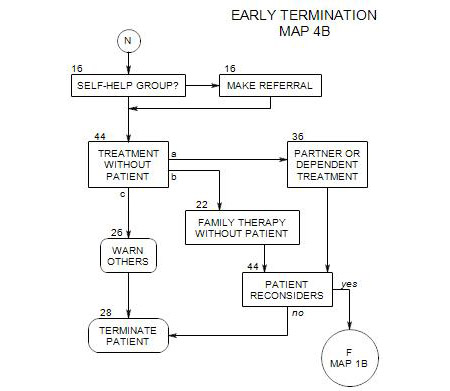 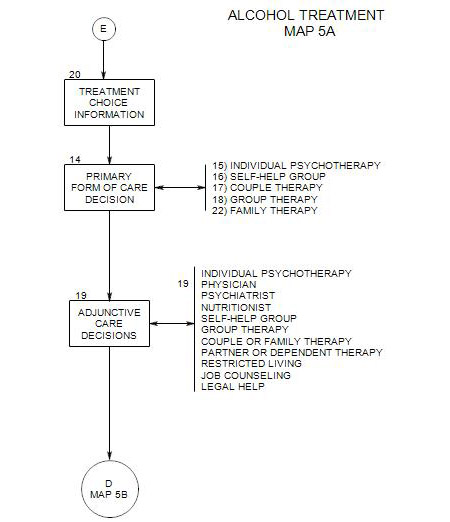 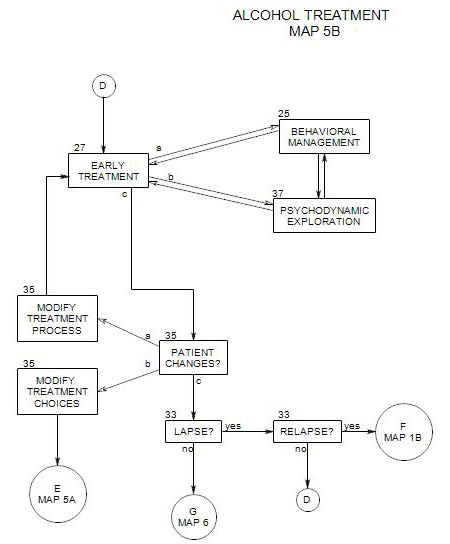 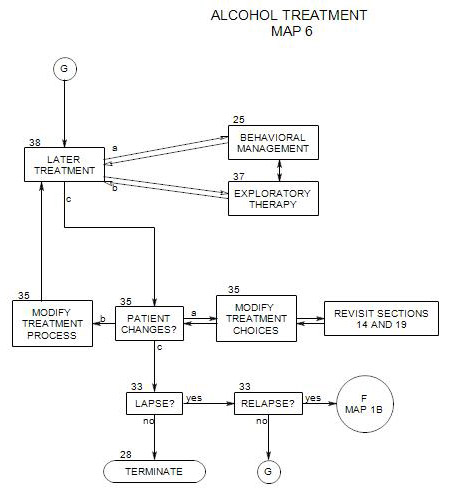 This section follows Section 35 [Patient Changes] on both Map 5B and Map 6, as one of the possible changes in treatment. A list of possible signs and symptoms of relapse appears as Section 43.

The possibility that the patient will return to drinking is a constant threat, whether is in psychotherapy or not, in a self-help group or not. Dealing with the possibility of relapse is a constant issue in treatment. For an abstinent person, staying sober is commonly harder than getting sober. For a controlled drinker, avoiding relapse is typically harder than for someone who is staying abstinent. Lapses and relapse are so common as to be considered by some as a natural part of recovery

Parts of this section:

33a. Lapse and Relapse

Not all occasions of drinking are relapses.

A lapse is typically a single event in which an abstinent person’s resolve fails and he/she drinks. If a person is attempting to use controlled drinking, then a lapse is a time when he/she drinks more, or longer, or more frequently than he/she intended. It may be as brief as a single drink or it may last several days. But it is a single event, typically impulsive and unplanned, and the person’s reaction is self-limiting and self-correcting. The person is usually upset about it, and it can serve as a basis for re-evaluating goals or the effectiveness of the strategy for achieving them. Used as a learning experience, a lapse can increase the person’s resolve and reduce somewhat the chances of subsequent lapses.

A lapse involves significant risks, however. While drinking, a person may engage in many of the behaviors that characterized prior drinking, and those behaviors can involve physical, interpersonal or legal dangers. A person may also be tempted to view a lapse as a personal failure, a sign of lack of will power or general worthlessness, and therefore proof that abstinence isn’t possible. That attitude could then justify a return to drinking, along with increased self-loathing, secretiveness, pessimism about the ability to stay abstinent, and withdrawal from treatment and any self-help group.

A relapse is characterized by a return to the person’s former way of drinking, that he/she was working to avoid. It involves a more serious failure of the ability to meet the person’s goals for managing alcohol use. It commonly involves a return to the attitudes and perspectives from before beginning treatment, and it can easily lead the person to drop out of therapy. If he/she relapses, the progression from sober to full involvement with alcohol is generally very fast.

33b. Dealing with Lapses

A person who has lapsed without relapsing tends to take the lapse seriously and to resolve to deal with the issues that precipitated it. He/she will typically report the lapse in therapy and wish to understand what happened. It presents an opportunity to review his/her program for weaknesses, to explore pressures and associations to the situation that precipitated the lapse, and to modify his/her treatment plan to be more effective.

This may be an opportunity to re-examine adjunctive choices and possibly re-activate aspects of treatment that have not been used for a while. For example, if the patient is in individual treatment, it might be a good time to have a few couple or family sessions, to explore the social pressures that the patient was under at the time of the lapse, and to modify family or couple structure to support the patient’s recovery more effectively. It might be an occasion to review medications used to treat psychological issues, and to reconsider their effectiveness. If the patient is in couple or group therapy, it might be a time to consider individual work, to explore the patient’s psychological issues in greater depth. If the person is not in a self-help group, this might be an incentive to begin; if he/she is involved, it might be a time to increase involvement.

Patients often try to resolve issues quickly and move on. However, within the therapy, a lapse can become a focal point that you can return to repeatedly as new associations come up and the patient considers other issues.

33c. Signs of an Impending Relapse

In general, there are a number of signs that a person may be on the path to a relapse. Drinking often is not the first sign – other indicators show that the person is in the process of giving up on his/her plan to manage his/her alcohol consumption. A person may become

Other signs may include

Of course, these are only signs of possible relapse. They must be examined with your patient, to interpret their meaning and seriousness relative to relapse and to the rest of your patient’s life. Behavior doesn’t provide its own interpretation. Also, these changes typically happen over time – although it could be a very short time, such as the time between weekly sessions.

In addition, some signs may be particular to an individual. They can be identified by examination of past relapses and points of ongoing tension. A list of other common symptoms of relapse appears in Section 43.

Relapses are common, possibly an intrinsic part of recovery.

Commonly, the person starts drinking again in response to an external event or pressure that he/she has not yet learned to cope with effectively.

On relapse, psychological dependence generally occurs almost instantaneously, and physiological dependence soon after. Any relapse longer than a day should be considered to be a crisis. If the person takes the first drink and doesn’t immediately run for help, he/she is almost certain to feel guilt, inadequacy, fear, failure, etc., that he/she is most likely to medicate with alcohol, perpetuating the problem.

It may then fall upon others: friends, family, therapist, etc., to interrupt an otherwise almost inevitable downward spiral.

This applies to a person who benefits from treatment but can’t hold onto those benefits, and repeatedly relapses. The patient is able to get abstinent but can’t stay abstinent. With such a person, you know that he/she will work and stay sober for a few weeks or months, then will almost certainly return to drinking.

There may be no observable change in the person’s life to which you could attribute the failure to maintain sobriety; but the person may experience his/her life in a different way internally.

With any alcoholic patient, you want to identify triggers for relapse. With a chronic relapser, some of the triggers will most likely already have been identified. You need to go over them with the patient, to determine what was missed in the past, to refine the patient’s understanding of them or reactions to them, and by doing so, to reduce the likelihood of future relapses.

Once you identify this pattern, it may be time to reconsider medication to handle the patient’s other chronic psychological issues, especially anxiety, depression, or one of the other comorbid disorders discussed in Section 8.

For example, a person who is depressed may drink to stop feeling anything, to get numb. If the drinking behavior is brought under control without treating the depression, then the person begins to feel depressed again. This may take some time, and he/she may not experience severe depression until addressing issues typically faced in the second year of recovery. At that point, his/her internal experience changes, and he/she starts drinking.

The standard approach to a person who has a relapse of a few weeks after even several years of sobriety, is to do an intervention [Section 13] and begin treatment anew.

If the person has broken an extended period of sobriety, you may judge the pressures to be so great that inpatient treatment is necessary to remove him/her from their influence and re-establish sobriety and program involvement.

If treatment is begun over [Map 1B] then some aspects of it may be truncated or eliminated. It is possible that a person’s stage of change will be higher in a successive round than it was on a prior one, or that other aspects of the diagnostic process can be assumed.

However, dependence and abuse are still life-threatening and still require the same basic process as the first treatment episode.